Attached is the powerpoint that was presented at our senior recognition dinner. Thank you to all spirit squads for your hard work this year!

On Monday, February 8, 2016, The BU Zoo and Binghamton Athletics held our Pack The House night as the men’s basketball team took on Albany. We had 1374 students in attendance! A thanks to Lisa Applebaum and BU Athletics for taking the photos! Check out the gallery!

Students showing off their Yowies

Students showed up early to Pack The House

Students showed up early to Pack The House

BU Zoo shirts were distributed to the first 250 students

The Pep Band was ready to go!

Hinman’s Mascot Tiki was excited to see Baxter! Hinman won our Reslife contest and was awarded $250 towards their community

The line outside the Events Center as students came in

The Pep Band was ready to go!

VP of Public Relations Brett Malamud reacts to a call

The Big Heads were out in full force

BU Kickline had the crowd on its feet during halftime

BU Kickline had the crowd on its feet during halftime

BU Cheer performs on the court

Justin McFadden goes up for a layup

Introducing the 342 blog!  Here we will share our experience with launching the BU Zoo and give tips for launching student sections at other schools! We start off with founder and former president of the BU Zoo, Andrew Loso.

“First they ignore you, then they laugh at you, then you win.”

This is a quote that resonates strongly with me, and many people on Binghamton University campus. As a 2015 graduate of Binghamton, I often find myself reflecting on my time on campus, and what made Binghamton University as a whole an institution that I love with my whole heart and whose student body I admire greatly. As someone who was actively involved in the advancement and promotion of Binghamton, I was often asked a simple question: Why? Why Binghamton? Why do you so passionately support and speak so highly of your campus? My reason lies in the words of Mahatma Gandhi. If I had to boil down the essence of the Binghamton student body into one phrase, it would be “enthusiastic betterment”. A Binghamton student is unafraid to better him or herself, that much is a given. Many Binghamton students do not come from privileged backgrounds, but regardless, accept and embrace the challenge of attending one of the most rigorous public schools in the country. But what captivates me the most about the students at Binghamton is their eagerness to enthusiastically dedicate themselves to the betterment of matters that are important to them. A Binghamton student is unafraid to be the first student to stand up and work to move their campus and their world in a better direction, even if they may be ignored, even if they may be laughed at, even if they may be mocked as supporting something futile. A Binghamton student simply does not care, because the soul of Binghamton campus is rooted in enthusiastic betterment.

I found this soul to be manifest in no better form than in the BU Zoo. When I arrived on campus five years ago, many aspects of the campus were boasted. “The Premier Public University of the Northeast!” I proudly thought to myself as I began my classes, took my tests, meet my friends. I also felt pride in the value the university provides; joining a cohort of students who operate at an ivy league level, but at a public school price and with a public school humility. What I did not see, and what many students complained about, was a stark lack of school spirit. This struck me most profoundly when I attended my first basketball game, only to be greeted by no more than a hundred students, spaced out on the bleachers, lacking any semblance of collective energy. Myself as well as a few friends decided early on that we would dedicate our college careers to fixing this problem. School spirit is more than cheering for a team, it is the unity of tens of thousands of souls, rallying around a single cause. School spirit knows no race, no gender, and no social boundary. It is the most inclusive force on campus, and that was something I knew I could get behind.

For a long time, the small, dedicated group I worked with was ignored. We met, held a handful of events, and represented nothing more than white noise on campus; a small, perhaps even delusional group of students taking on a culture that apparently could be changed by nothing more than a winning sports team. For a long time, we were laughed at. Classmates mocked the hard work, people proclaimed a lack of school spirit even when we thought we created some. Then, something started to happen. The naysayers began to graduate. The Zoo began to interact with incoming classes. Slowly, ever so slowly, the idea that Binghamton does have a spirit did not seem so taboo. Slowly, ever so slowly, the stands began to wear green. Slowly, the tradition of Green Day Friday became a bit of a norm; a bit of a part of the normal experience. It was in this process, in this dedication, that I realized the true beauty of the Binghamton student.

This by no means is limited to the Zoo. The Zoo is a great example of something bigger than the Zoo, bigger than all of us. It is the beauty of enthusiastic betterment. It is the process the Mahatma Gandhi touches upon, and it is the reason why Binghamton is a university I stand behind, and am immensely proud to call my own.

So- I ask you, my fellow current students who I am increasingly envious of as I pursue a career in corporate America. How do you wish to spend your four years? They will be over faster than you could possibly begin to imagine. Commit to something. Make something better. If school spirit is your vibe, I invite you to join the fine boys and girls of the BU Zoo in the stands for the next game, and help them in their process that continues to this day. If not, I invite you to consider dedicating yourself to something you care about on campus, perhaps even a group or initiative that currently is being ignored. Perhaps a group or initiative that is currently being laughed at. Because, in time, you will win, and you will have memories that you will trade for nothing.

Join The BU Zoo and BTV in the marketplace on Saturday at noon to watch the Binghamton University Men’s Basketball team take on the nationally-ranked number three Michigan State Spartans! Tully’s will debut their brand new menu items and there will be givaways and raffles from BU Dining Services and the BU Bookstore! And of course…FREE POPCORN! So come on down and cheer on your Bearcats!

Welcome Back students! We will be having our GIM meetings within the next few weeks. Please stay tuned for updates!

Hey everyone! We hope that you’re all enjoying the spring time weather. Announcing the winners of Baxter On Break!!!

Prizes will be awarded at Baxter’s Mascot Madness victory on May 1st. Thanks to everyone who participated!

Baxter on Break voting is here!!!! We’ve seen your photos and now are leaving the decision up to you! We’ve launched a vote and the top three most voted pictures will receive the following prizes:

In addition, go to @The_BU_Zoo on Instagram to like your favorite photo for bonus votes! You may vote once every 24 hours on the poll! Voting closes at noon on Monday, 4/21. Good luck everyone!

Thanks to all of our spirit squads on a fantastic year! Click the link to check out this Powerpoint reflecting on the 2014-15 season!

Thanks to everyone who showed up to cheer on the men’s basketball team on Wednesday night! Congrats to the team on their victory against Vermont!!!! Also, please take this survey to help us improve the zoo! (<–click the link) Taking the survey will enter students in a raffle for a $50 gift certificate to the bookstore! Finally, check out these photos of the zoo taken by Lauren Hunter! 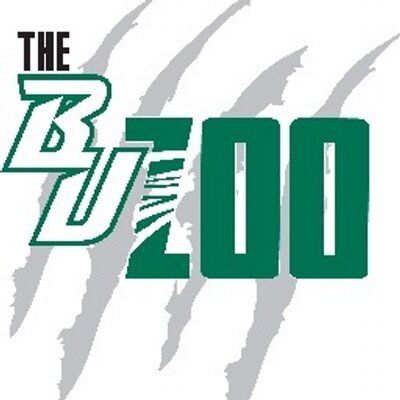